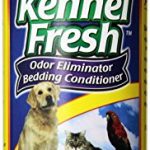 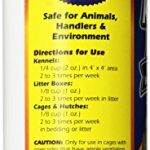 Reduce odor, harmful ammonia gases, moisture, and aid in controlling insects before your pet is exposed to them
Great to use in cages, kennels, runs, doghouses, litter boxes, hutches and clinics for dogs, cats and other small animals
Essential oils in KennelFresh replace the harmful ammonia gas with a pleasant smell and serves as an insect repellent